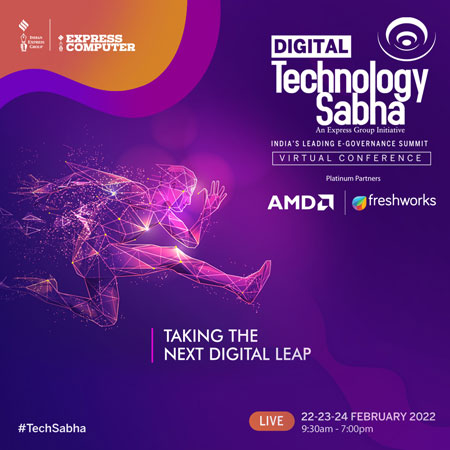 Digital Technology Sabha 2022: Taking The Next Digital Leap
It has been more than six years since the Government launched the landmark, Digital India project that was created with a vision of transforming India into a digitally empowered society and knowledge economy. Today, the Digital India project has turned out to be one of the biggest success stories with several successes and landmark digital initiatives that have perhaps no parallel anywhere in the world.

Over the past one and a half decade, e-Governance in India has continuously evolved into a progressive Government program, from being an initiative for computerization of Government departments to Governance initiatives that focus on citizen centricity, service orientation and transparency.

The Covid-19 pandemic put to test these very e-Governance initiatives. India’s prowess in the information technology space and the use of it in providing services by various Municipal Administrations, State Governments and Central Government has been proved beyond doubt.

Key Topics to be discussed :
+ Recognizing trailblazer projects that have changed the face of e-governance in India
+ Learnings from successful e-governance projects – What has worked and what has not
+ Emerging technology showcase – Case studies and examples of states and central departments who have used emerging technologies such as + AI, Blockchain, Cloud to foster innovation and create a unique value proposition
+ Building an effective cyber security posture – Learnings from thought leaders on how states and central departments plug security gaps

Who will attend:
Secretary and Senior officials from Ministry of Electronics and Information Technology, Government of India & prominent members from the NeGP -

Watch the recordings of Webinars you missed

How TestEnsure can help accelerate your Infor LN testing

End to End testing with TestEnsure

Re-engineer your business with Intelligent Automation

How Amazon REALLY Wants You To Optimize Your Listings

How to build effective SEO strategies

How to Deliver an Engaging and Interactive Programming Course Today?

Envisioning Data Science and ML in Changing Dynamics of Industries